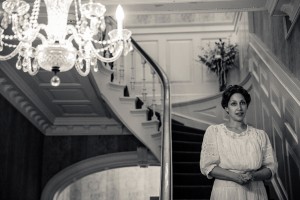 The George & Rebecca Barnes Foundation is proud to present Garrett Heater’s Lizzie Borden Took an Axe at the Barnes-Hiscock Mansion October 7 – 23rd. A multiple-award winner, Lizzie Borden Took an Axe utilizes court transcripts and inquest testimonies to bring the drama to life in a chronologically faithful adaptation. Striving to be the most historically accurate play written regarding the notorious events, the audience is challenged in an unbiased manner to come to their own conclusions as to who perpetrated the crimes. 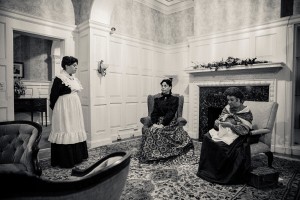 Set throughout the rooms of the mansion, the play recreates scenes leading up to and immediately after the 1892 double-murder of wealthy businessman Andrew Borden and his second wife, Abby Durfee Gray Borden. Both were found mutilated in their home, 92 Second St. in Fall River, Massachusetts, by hatchet or axe and Andrew’s 32 year old daughter Lizzie (step-daughter of Abby) was indicted and stood trial for the crime. She was eventually acquitted of the gruesome homicides and the crime has remained unsolved for over 120 years. Following her acquittal, Lizzie Borden remained in Fall River. Her friends and neighbors, once staunch supporters of her innocence, quickly left her side after the trial and she became a social pariah. 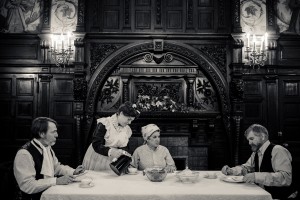 But Lizzie (played by Jodi Bova-Mele) isn’t the only suspect in today’s world of armchair sleuths. Some feel that the Irish maid Bridget “Maggie” Sullivan (Sara Weiler) had been pushed to the limit of servitude by her employers and dispatched them. Others suspect Lizzie’s older sister Emma (Carmen Viviano Crafts) who may have planned the murders with their uncle John Morse (Chuck Parsons) in order to prevent a new will being drawn up, giving most of the Borden fortune to their step-mother Abby (Kate Huddleston). Dr. Seabury Bowen (Matthew Gordon) is often viewed as being complicit in the murders, perhaps feeling sorry for possible abuse Lizzie suffered at the hands of her father Andrew (Mark Cole). Prying neighbor Adelaide Churchill (Shannon Tompkins) was on hand to comfort Lizzie after the murders were discovered, while Lizzie’s dear friend Alice Russell (Maya Dwyer) eventually found herself testifying at the trial one year later.

“Like the masters of the twentieth century golden age, Heater emphasizes layers of characterization, in which each person’s secret is revealed late in their narrative arcs, often indirectly.”                  -Jim MacKillop, Syracuse NewTimes

“…Heater’s original script raises more questions than answers, and that’s what it should do because the audience came for compelling intrigue, not historical dogma. And compelling it is, as well as historical.” -Tony Curulla, Syracuse Post-Standard

Lizzie Borden Took an Axe will thrill audiences once again this fall, having sold-out of all performances at the Barnes-Hiscock Mansion over the past 2 years. Reserve your $20 tickets without delay by calling 315.422.2445!

All photos by Amelia Beamish of AB Photography

Friday, October 7th is SOLD OUT!

Friday, October 21st is SOLD OUT!

Saturday, October 22nd is SOLD OUT!

Sunday, October 23rd is SOLD OUT!